As the capital city of Finland, Helsinki is one of the fastest growing cities in Europe and has something to offer for everyone. 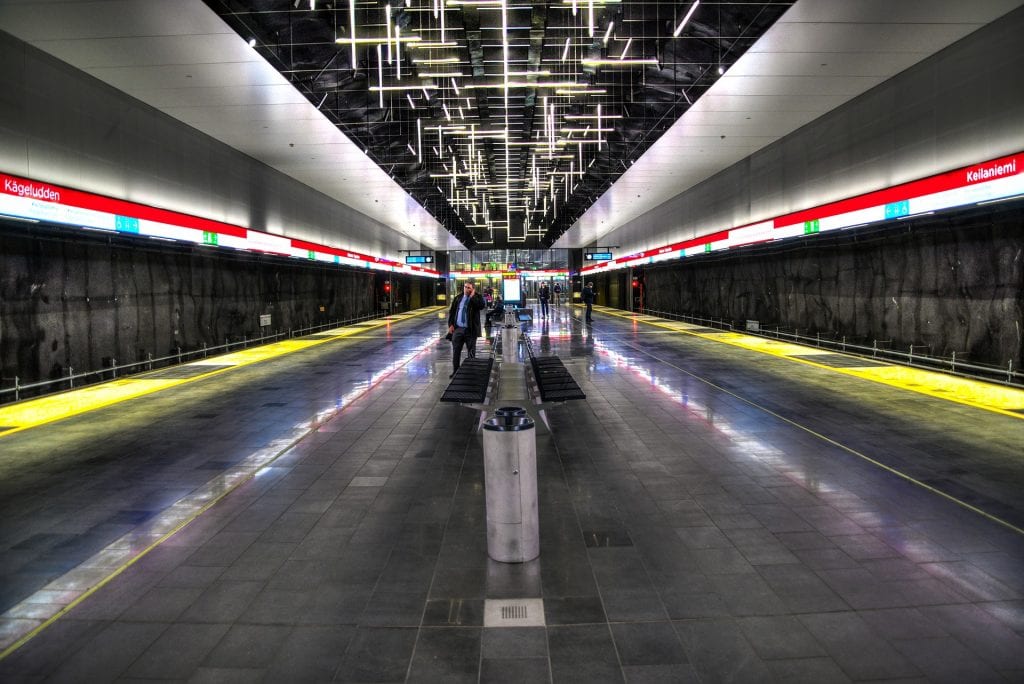 The capital Helsinki has a laid back and refreshing vibe. The beautiful art-noveau buildings mix well with Finnish modern architecture and host the contemporary and vibrant Nordic lifestyle.

The beautiful design extends inside of the houses, too. Helsinki features multiple urban galleries and museums, as well as vintage and antique shops, and countless restaurants with wonderful interiors and themes.

Part of the city’s charm is the clear difference between the districts: you can find anything from peaceful and cosy cafés to sleek fusion bars, or from high-end fine dining to buzzing food markets. You can drop by at the quirky thrift shops or hit the shopping streets with all the biggest local and international brands. Relax in the gorgeous city gardens or take a walk in the wild forest, or enjoy the sun on the long sand beaches and stunning natural cliffs.

A great place for students

Helsinki features several higher education institutions, and a significant fraction of the residents are students and young adults. This is recognized by the city, and public transport, most museums and other attractions, as well as sports centers and many recreational courses offer student discounts. Besides the cheap and plentiful student meals sold on campuses, also many restaurants and cafés have student prices.

The recently opened library Oodi and many other public libraries have study halls and silent rooms for students to concentrate on their studies. Often there is a student café nearby where students go to have breaks and grab a bite.

The outdoors offers many exercise and leisure time possibilities, ranging from beaches and jogging tracks to free of charge Frisbee Golf fields.

Helsinki has a buzzing night life, and there is a scene for every subculture. Some of the clubs internationally recognised and host world-class DJs. Not that much a fan of dancing? Head to the cosy bars to spend a chill evening with your friends or a pub hosting concert.

Population: over 60,000 and approximately 1.3 million in Greater Helsinki

The climate is a mixture of maritime and continental. The summers are bright, with the sun shining more than 19 hours a day, and the temperature hovering on both sides of 20C°. The autumn is beautiful and busy, with the trees turning red and yellow during the harvest time. The winters are dark, but Helsinki gets covered in a blanket of snow that reflect all the light. The temperature drops below zero. In the spring, the ice covering the Baltic sea breaks, and you can clearly tell how the days get longer and brighter each day.

The basis of Finnish food are fresh local ingredients. Helsinki has many amazing restaurants that offer great Nordic cuisines, and especially Nordic fine dining is on the rise. However, the selection of different ethnic restaurants is also growing, and you can easily find Chinese, Japanese, Vietnamese, Moroccan, Spanish, Italian, Jamaican and may other cuisines. The Finns also enjoy their coffee, and Helsinki is packed with cafés and pastry shops.

The night life has also lots to offer. You can enjoy a chill evening in a cosy bar or pub, or head out to the clubs. A great place to dance the night away is Complex in Kallio, that hosts three different clubs. Or head to the central, where you can select from many various bars and cocktail places before trying out some of the clubs, some of them underground and some on the highest floors of the buildings!

Helsinki-Vantaa is Finland’s main airport, and the city can easily be accessed with a cab, airport bus, or train. In the city getting around is easy with the network of public transportation that consists of underground, trams, trains, and busses. Students travel half the price! The public transport is all operated by HSL, and you can find a journey planner from their web site: simply fill in your departure place, destination, and the desired time and date, and the application will give you directions and tell you exactly how to get to the destination.

As in everywhere in Finland, the public transportation is safe and in schedule. Traveling to other cities is easy with the train or by bus. The Helsinki-Vantaa airport has also excellent connections to everywhere in Europe and all the major cities in Asia.

The local transport in the Helsinki region is operated by Helsingin Seudun Liikenne (HSL). HSL offers a student discount of 50%, that is applicable to both regional and internal season and value tickets.

The discount entitlement is stored on the personal Travel Card upon purchase, and must be renewed annually.

More information on the criteria and how to apply for the Student Travel Card can be found from HSL’s website: https://www.hsl.fi/en/tickets-and-fares/discount-tickets/students

Here you can find a list of the student restaurants catering in Helsinki: https://asiointi.kela.fi/opiskelijaravintolahaku/OpruokaApplication?karttalinkki=eng08000091

You can find more information from FSHS website: http://www.yths.fi/en/

Or directly from your own UAS or university.

Accessed by a ferry all year, the fortress island of Suomenlinna is a beautiful UNESCO world heritage site. The island hosts museums, shops, cafés, and restaurants, as well as living residences. It is a popular picnic place during the summer time, with it large grass fields and natural cliffs.

Right next to Kauppatori market place is an oasis in the middle of the city. The Allas Sea Pool is a complex containing a large pool area and great saunas, as well as a lookout spot offering drinks and food and hosting various events throughout the year. Allas is a popular place for people to gather together and enjoy the view over the Baltic sea.

Build in 1888, the beautiful Old Market Hall nowadays hosts many food shops, stands and restaurants. While you can find a traditional Vietnamese place or shop Spanish ingredients, many of the shops and restaurants concentrate on high quality Finnish and Nordic cuisines.

Excavated inside solid rock and covered with a dome, the church built in 1969 is a popular attraction. The place has great acoustics and serves often as a venue for concerts and weddings. On top of the interesting architecture, even the altarpiece is an ice-age crevice!

Since the 1950s people have gathered to the hill of Linnanmäki to enjoy themselves. While the 67-year-old rollercoaster still remains the most popular device, the amusement park offers a wide range from fun to wild rides. From the tall rides, you can see the over the whole Helsinki and beyond. Linnanmäki has also many game arcades, as well as a theatre and multiple venues for other events, that are held on regular basis.

The Senate Square is surrounded by art-noveau buildings designed by Carl Ludwig Engel: the white Helsinki Cathedral, the Government Palace, the main building of the University of Helsinki, and the National Library of Finland. A statue of the Russian tsar Alexander II, who was also the Grand Duke of Finland, is located in the middle of the square. The stairs leading up to the cathedral are a wonderful place to watch the sunset!

Located in the central Helsinki in a neo-renaissance building, Ateneum is the home of both Finnish and international art works from the 19th century to modern age. The exhibiton Stories of Finnish Art displays not only the masterpieces of artists such as Eero Järnefelt and Edvard Munch, but also their sketch books and notes, giving insight to the artists’ lives. Temporary exhibitions have featured names such as Tove Jansson, Pablo Picasso, and Helene Schjerfbeck.

Built in 1938, the stadium hosted the Olympic games in 1952. Today the stadium is the venue for many national and international sports events, as well as outdoor concerts. The stadium tower is 72 metres tall, and open to visitors. A restaurant and the Finnish Sports Museum are also located at the stadium.

Opened in 2014 at Katajanokka, the Finnair Sky Wheel lets you have an amazing view over the central Helsinki as well as gaze to the sea and at the horizon. The blue and white –the colours of Finland- wheel stands 40 metres tall!

The National Museum lets you explore the history of Finland from medieval times until the 19th century. In addition to the permanent exhibition telling how the life was over a 1000-year period, there are also changing contemporary exhibitions as well as the interactive Vintti, where you can learn about the history by participating in it yourself.

The Museum of Contemporary Art Kiasma features temporary exhibitions of contemporary art. Along with augmenting its collections, Kiasma also conducts research in art. Although the primary focus is in contemporary Finnish art, the museum more often than not features also exhibitions of international artists. The beauty in Kiasma’s exhibitions is their inclusiveness: the art works and installations can be interactive and trigger all your senses!

Located in one of the busiest corners in the whole city and at the entrance of Kamppi Shopping Centre, the Chapel of Silence offers an opportunity to calm down and take a breath. The modern, round design is soft and protects the visitor, while blending well in the city centre.

Seurasaari Open Air Museum is located on a beautiful island just a few kilometres out of the city centre. The atmosphere is relaxed and tranquil, and people often come here to take a break from their busy lives. In the summertime, the traditional Finnish way of life is displayed in the cottages, farmsteads and manors of the past four centuries, that have been relocated to Seurasaari from all over Finland. You can also find a restaurant, multiple kiosks and a beach from the island, as well as a barbecue spot.

To the south of the Esplanade, the area named Design District hosts over 200 design attractions on 25 streets including museums, galleries, studios, shops, showrooms and restaurants. Design Walk, a guided tour in English on every Friday, is a good way to get an insight on Finnish design. If you prefer exploring by yourself, there are also Design District Route Maps available free of charge.

See Visit Helsinki for many other amazing things to experience!

EDUNATION PATHWAY DIPLOMA IS YOUR FAST TRACK TO UNIVERSITY STUDIES IN EUROPE!